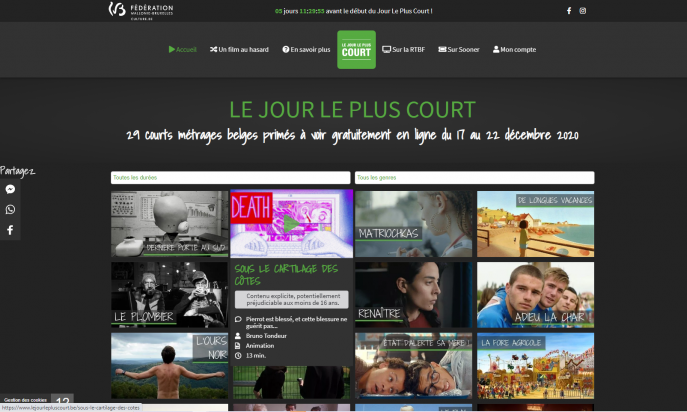 This is a sort of mini Netflix or mini Amazon Prime Video :)

The whole website and the film details are public, but the films are such are visible only
during the period of the action and only from certain countries (due to legal restrictions).

This website makes an extensive use of Custom Fields.
Here is the technical side of the website:
Latest Joomla 3.9.x version
Hosting at PlanetHoster
Based on Astroid Framework.
Almost no Override (exept for Related Articles Module in order to fetch the Full Image), so essentially playing with CSS.
In order to avoid the need for Overrides, a few on-the-fly replacements using Regex.

Here is a summary of the features of the website:
- Thumbnails with preview of a film exerpt
- Several filters, each with multiple selections
- Possibility to vote on each of the films (one vote per film per user, which is only displayed when at least 75% of the video has been viewed)
- Simplified account creation for the general public
- Possibility to connect via Facebook & Google
- Messenger / WhatsApp etc. share buttons
- Films available with geographical limitation and only during the period of the operation
- Suggestions at the bottom of each film card (based on keywords that can be freely determined)
- A "random film" menu
- One countdown before the action, another one during the action
- Some menus that are displayed in popup ("learn more", ...)
- A Messenger robot that will make film suggestions (will be activated soon)
- A dark mode design, also more suitable for film viewing
- Form to collect emails from interested people before the action
- Granular cookie management
×